April 16, 2020
Orthopaedics junior resident terminated, will not be able to complete DNB course

A junior resident doctor from North Delhi Municipal Corporation''s (North DMC) Hindu Rao Hospital was terminated by the hospital authorities allegedly after he posted a video on his social media page complaining about the mismanagement in the hospital. "The Doctor in the Orthopedics department is terminated from his services with immediate effect for bringing disrepute to the institution," a letter from the hospital said.

The doctor, however, has refuted the allegations made by the hospital administration and claimed that the termination came after he distributed face shields procured through an NGO, among the residents doctors.

"I had distributed face shields among the doctors which I got from an NGO, but the Medical Superintendent of the hospital told me to return them. I even tried getting them back but the other doctors denied returning them, and now this has caused me the job," doctor Piyush Singh, DNB (Ortho) told IANS.

However, senior authorities in the hospital claimed that the termination came for a video that Singh posted about a month ago, where he was seen showing leaking water from hospital ceiling and other mismanagement. Singh was also given a show cause notice for the same by the hospital authorities.

"You have bypassed the available channels to you for addressing your grievance and directly recorded it to social media, which is an objection," the letter issued on March 16 read.

Singh was then given 24 hours to explain himself, however the termination after a month has left Singh questioning.

"I had then written various apology letters and also explained myself before each authorities that I did not post the video, but had just shared someone else''s post on my timeline. I was told that the matter and over and I continued to go to the office," Singh claimed.

Meanwhile, in a brazen display of administrative terrorism against doctors, NDMC Commissioner Varsha Joshi (IAS) has come out in defence of the hospital authorities & made it clear that the termination order was served as per her instruction. In a series of tweets reflecting her authoritarian attitude and lack of respect towards established democratic norms, she has made unverified allegations, used unparliamentary language and made derogatory comments on the doctor's conduct and character, which amount to violation of CCS (Conduct) Rules, 1964. In one tweet, she mentions: "...and directed his termination only, so that he can pursue his career elsewhere, since I certainly don't want such folk HERE." In another vindictive tweet, she says: "If some other organisation wants such folk, well, you're welcome to him." Going a notch above, in another tweet she accuses the doctor of theft and threatens him: "The thief. If I wanted to "kill" I would have started proceedings under the Act. I still can, would you like that?"  At a time when Prime Minister Narendra Modi has expressed his gratitude towards doctors and the whole nation has echoed his words, use of such language and that too on social media is totally unwarranted. By her words and action, she has brought a bad name not only to herself and NDMC, but also to the esteemed civil services to which she belongs. Resident doctors who are the on-ground Covid warriors across the nation are seething in anger at such autocratic behaviour and injustice meted out to one of their colleagues, who had done no wrong other than ensuring adequate Personal Protective Equipments (PPE) for frontline covid workers.

A doctor from Hindu Rao Hospital, on conditions of anonymity, informed: "Dr. Piyush had done no wrong. As the authorities were unable to arrange adequate PPEs, he took the initiative to contact an NGO and arrange PPEs for us. Two days ago, he even paid from his own pocket to arrange face shields & PPEs for some of us who are posted in high-risk wards. Is it wrong to arrange adequate protection for ourselves? And these are not govt. supply, then why should it be routed through the hospital store? Few days ago, the doctors and nurses of Hindu Rao Hospital who submitted their resignation due to lack of PPE were being threatened by the administration for disciplinary action. On what basis do they take action? Doctors are under no obligation to work without protective equipments. The Commissioner considers NDMC as her private property. She has terminated him just to instil fear in us so that we do not speak about the shortage of PPE. Termination of a junior resident means he would not be able to complete his DNB postgraduate course, thus destroying his career. We are not going to accept this lying down." 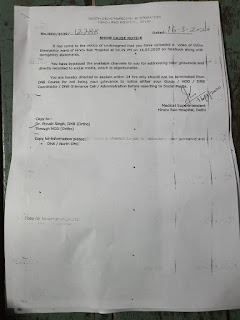 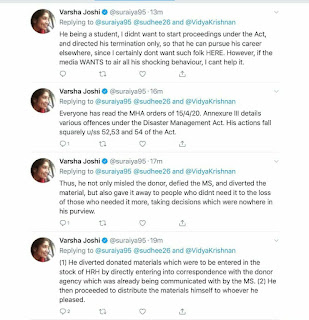 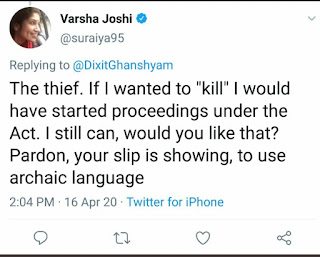 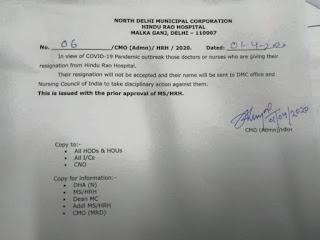