Showing posts from February, 2014
Show all

STAY ON FIRST COUNSELLING....TODAY HON'BLE CHIEF JUSTICE AFTER LISTENING TO DGHS AND MCI ENFORCED STAY ON FIRST COUNSELLING .ONLY REGISTRATION WILL BE ALLOWED REST EVRYTHING WILL BE WITHHELD. Wait till orders to be published on MCI or MCC website. 1. MCI asked for time to study the affidavit filed by DGHS. so honorable chief justice granted time till friday. 2. MCI said for increasing seats also they need to extend 3rd counselling further as 15 April is not sufficient. Means seats also increasing in 3rd counselling for sure. 3. On streamlining counselling process DGHS and MCI said this is not possible for this year. Hon'ble chief justice said students are suffering from last 7 years so everything ll be enforced from this session only. 4. Chief justice ordered all states to report there schedule on next hearing. Next hearing on Friday.
Read more

There is a proposal to hold online common entrance examination for MD/MS courses of AIIMS, New Delhi and PGIMER, Chandigarh for the session January, 2015. This schedule is tentative. The dates of common online entrance examinaiton will be displayed in the website of the PGIMER and also in the newspaper separately.
Read more

India’s medical education regulators have rejected applications from 170 medical colleges and teaching hospitals, including some in Bengal, to start or increase postgraduate seats. The Medical Council of India (MCI) has cited faculty problems, poor infrastructure and — in a few cases — inflated patient numbers. (See chart) An MCI committee on PG education has rejected applications for 440 courses among the cumulative count of over 800 courses that the medical colleges had proposed to start from the academic year 2014-15, MCI documents show. The panel’s decisions, based on inspections of medical colleges, reflect the challenge India faces in efforts to expand the number of PG medical seats and reveal how many medical colleges are scrambling to add PG seats, seemingly without the required infrastructure or patient loads. The country’s 381 medical colleges currently offer about 50,000 undergraduate MBBS seats. Those who graduate can compete for 24,242 seats for PG
Read more

The story of removal of  Keshav Desiraju , a 1978 batch  IAS officer  of Uttarakhand cadre, as health secretary and his transfer to the non-descript consumer affairs ministry is not only being seen about the influence of former MCI boss Ketan Desai but more importantly of Congress' courtier culture. In the process, Desiraju, considered one of the finest officers known for his work in education and health sectors, paid the price.  According to highly placed sources aware of the sequence of events, Desiraju, as additional secretary in the health ministry, had played a key role in the cleaning up of the  Medical Council of India  that led to the ouster of Ketan Desai. But for the past few months, Desai and his men have been working hard to make a comeback.  Desai, who faces two chargesheets filed by the CBI for his alleged bungling in MCI affairs and gross financial irregularities, was nominated to the MCI by Gujarat University.  Even as the health ministry was taking
Read more Striking  senior resident doctors and medical students of top Delhi hospitals, including  AIIMS , called off their agitation on Thursday after Union health minister  Ghulam Nabi Azad  made it clear that there is no proposal to extend the duration MBBS Course.  To the relief of the students, the minister also said rural posting will not be mandatory for those appearing in PG examination for the year 2015-16.  An official press statement issued by the health ministry stated, "Health minister, Ghulam Nabi Azad, met with the representatives of agitating medical students here today."  "He listened to all their concerns patiently and allayed their fears regarding Medical Council of India (MCI) Notification in respect of one year mandatory rural posting of PHC after completion of MBBS, before they seek admission to PG Course. The Minister has directed concerned officials of the Ministry to keep the Notification in abeyance."  A letter to this effect
Read more

Medical students today held a protest here against the proposal for increasing the duration of the MBBS course from the existing 5.5 years to 6.5 years with the addition of a compulsory one-year rural posting for admission into post-graduate programmes.  At the protest which was held in front of Nirman Bhawan, the students demanded that instead of increasing the course duration, the compulsory one year rural posting be either incorporated within the existing MBBS course structure or included as part of the PG curriculum. "We are not against rural postings, but we want the one- year rural internship to be included as a part of our curriculum either during the MBBS course or at the post- graduate stage," said Dr Anirudh Lochan, national secretary of the Young Doctors Association of  India .  Police had to use water cannon to disperse the protesters when they attempted to enter the premises to meet the Union Health Minister,  Ghulam Nabi Azad . Around 2,000 doctors
Read more 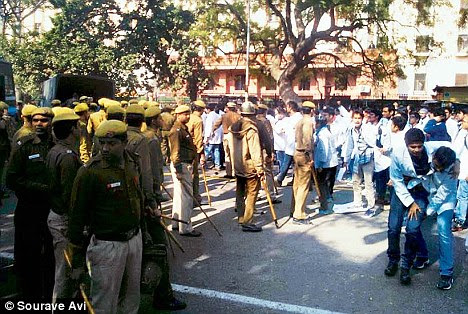 Wednesday was a day of shame for Delhi Police as they fired water cannons and lathi-charged a crowd of medical students who were peacefully protesting against the proposal to increase the duration of the MBBS course.  At least 2,000 students from Delhi's top medical institutions, including AIIMS, Lady Hardinge, Maulana Azad Medical College and Vardhman Mahavir Medical College, were protesting in front of Nirman Bhawan against the government's plan to extend the course's duration from 5.5 years to 7.5 years.   About 40 students were rushed to nearby hospitals after the police thrashed them; even girls were not spared. Following the incident, resident doctors and students from all the five medical colleges have gone on an indefinite strike.  The protesting students have demanded that their representatives be allowed to meet Union Health Minister Ghulam Nabi Azad.   The students desire that instead of increasing the course duration, the compulsory one-year rural post
Read more

As per the recommendations of Multidisciplinary Expert Group, a bond of 1-yr rural service or 10 lakhs fine to be introduced for those taking admission in PG courses in West Bengal from 2014-15 session.
Read more
More posts