Showing posts from October, 2014
Show all

Unlearning to relearn: a physician’s thoughts

Guest article by Dr. B.M. Hegde The Ebola outbreak sets the context for some ruminations on life, death, disease and health I was supposed to be a good student in school and medical school, and passed examinations with credit. In retrospect, half a century later, I feel that was not a compliment. It is only now I realise that what one learns in school is not what lasts long, and it is probably not the whole truth anyway. What one studies there is only information that is many a time doctored to suit the convenience of industry or the powers-that-be. The label of a good student gets into one’s head. When I completed my training abroad, passing examinations there, I was fooling myself into thinking that I “knew it all”. To that extent I was also arrogant. Early on in my life, I learnt the lesson of my life. The incident is still fresh in my mind. I was called to the hospital one day at 2 a.m. to see a patient brought dead after a massive heart attack. My colleagues wanted me
Read more 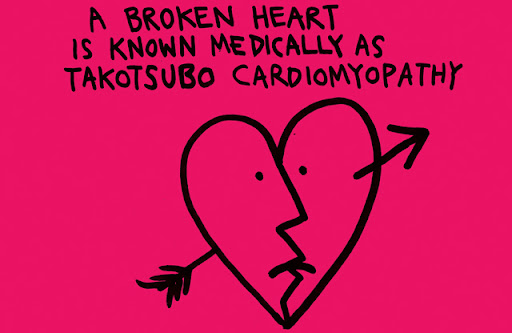 A broken heart can feel very real for those experiencing the loss of a loved one or significant other. But for some, the emotional stress does quite literally break their heart — at least temporarily — causing symptoms that can mimic a heart attack.  Broken heart syndrome is one of the many names for takotsubo cardiomyopathy, a rare and temporary condition where part of a person's heart suddenly becomes weakened or 'stunned' — forcing the rest of the heart to work harder.  When this happens, the heart's left ventricle changes shape, developing a narrow neck and round bottom.  The shape created by this bulging out earned the syndrome the name 'takotsubo', meaning octopus, in Japan where the condition was first reported.  The condition is also referred to as acute stress cardiomyopathy and apical ballooning syndrome.  What causes it?   There are various theories as to what causes the condition. About three quarters of those diagnosed
Read more

Even as tuberculosis (TB) continues to haunt the world, a new study has revealed that funding for research and development of new drugs to fight the disease is floundering. Private sector funding has declined by more than a third since 2011 as pharma companies are closing their TB research programmes. Pfizer shut down its TB drug discovery programme in 2012, AstraZeneca in 2013 and Novartis in 2014. Meanwhile, multi-drug resistant TB is rapidly spreading with 450,000-odd new cases reported in 2012 by the World Health Organisation (WHO). The report was prepared by Treatment Action Group (TAG), a New York based health policy think tank. It pointed out that while $9.8 billion was needed to fight TB during 2011-2015 according to a Global Plan prepared by experts in 2011, the world spent only $1.99 billion by the end of 2013. India spent around $7.6 million in 2013 on TB research according to the TAG report. The highest spender was the National Institute of Allergy &
Read more

Keeping in view the upcoming PG entrance exams, PG Times has come up with a unique concept of free online mini mock tests. In order to help thousands of PG aspiring medicos get a seat of their choice, PG Times has launched free mini Mock Tests on its website.  Ten questions (including image-based questions) will be published daily based on all the subjects asked in different PG medical entrance exams.  Questions will be framed simulating the latest NBE-based All India Pattern. Students can attend these free tests to get an idea of their preparation. No registration is required to take the tests.  The test would remain online till a new test is published.  Candidates will get the correct answers and their scores immediately after completing the test. Click Here to go to the Mock Test page
Read more Prime Minister Narendra Modi on Thursday met various groups of flood-affected people here to understand their problems and listen to their suggestions on the  rehabilitation process following the recent floods. These included delegations from chambers of commerce and industry, social organizations and NGOs, civil society organizations, transport operators, tour and travel operators, fruit growers, dealers and horticulture institutions, educational institutions, youth organizations, religious communities and political groups, according to an official statement. The Prime Minister said that a common thread running through the interaction with all groups was the suggestion that affected people should be given help directly. He said this request would be seriously considered. For instance, he said, it could be considered that assistance for rebuilding houses could be given directly to bank accounts of beneficiaries. Over and above the special central assistance of Rs 1000 crore t
Read more

Keep the student in you alive, says PM Modi at AIIMS convocation

The 42nd convocation of AIIMS was a memorable occasion as for the first time the premier institute initiated the tradition of presenting lifetime achievement awards to medical professionals associated with it. Prime Minister  Narendra Modi , who gave away the lifetime achievement awards to former senior faculty members of AIIMS who have contributed immensely to the development of the institution and also to medical science in the country, advised the passing out graduates to keep the student in themselves alive. "Keep the student in you alive. These people whom I have honoured today with the lifetime achievement awards, they belong to the age group of 70-80 years. But if you meet them, you will find that they are very much aware of the latest developments of medical science, not because they need patients but because the student in them is still alive," said Modi. Reminding the award winners of their days at the institute, Modi said, "You had so many people t
Read more

Tackling TB requires both strengthening the public sector and engaging the private sector Over 60 per cent of all Indians seek health care in the private sector according to India’s last National Family Health Survey. This undoubtedly makes the private sector the largest provider of health services in India. The government health system, though vast and well-intentioned, continues to be overburdened with multiple challenges including long waiting hours, an ageing infrastructure, limited funding and human resources. Even though parallel providers of health services, the absence of partnerships between the public and private sector has disastrous implications for patients and for disease control. A striking case study is that of TB. With 2.2 million new cases and close to 3,00,000 deaths each year, TB is India’s silent epidemic. The 60 per cent of all TB patients who first go to the private sector receive care whose quality varies enormously, often leading to delays in diag
Read more

For public health as political priority

A systemic reform of the health sector in order to meet the key objectives of equity, efficiency and quality is long overdue. In this, the Central and State governments need to make interventions intelligently, decisively and strategically so that the poor reap the benefits How does Prime Minister Narendra Modi’s focus on population, health and subjects like public hygiene, the facilitation of toilets and ensuring preventive health through yoga fit in with his party, the Bharatiya Janata Party’s manifesto; one which promises a National Health Assurance (NHA) mission, with its aim of providing cashless hospitalisation in order to reduce out-of-pocket expenses? Why do these concerns seem contradictory? Does pursuing one necessarily hurt the other? These are legitimate questions and concerns. This must be looked at in a global context where there is discussion on Universal Health Coverage (or National Health Assurance) widening inequity in the short and medium term. In seeking the
Read more

Doctors in the dock Dear Dr Kalra, I am reporting against Dr ****** of ***** hospital. He did a renal transplant on my uncle. But it led to complications and uncle was in hospital for long. I watched the surgery on YouTube. Now I know doctor used wrong technique. Please take action against doctor. Dr K.K. Kalra staggered when he read the email. Open proclamation of 'guilt' against a doctor based on an Internet search? "This will only get worse," muttered the chief of the National Accreditation Board for Hospitals (NABH), India's quality control body for hospitals. He received far too many complaints these days, 50 per cent of all, from disgruntled families and friends of patients. He shuddered at the thought of what the future might hold. Doctors are in the dock. Lawsuits filed by aggrieved patients are jamming up courtrooms across the country. Their names get splashed day after day across front pages of newspapers, on computer and television screens across the nation. It is
Read more
More posts