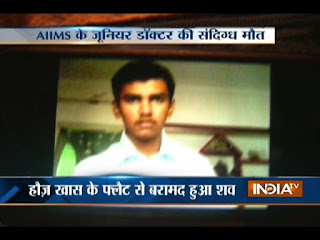 The Delhi Police recovered the body of a Junior Resident Doctor form his rented flat in Gautam Nagar area of South Delhi today.
Twenty six-year-old Dr. Sarvanan G from Tamil Nadu, who had joined AIIMS as a JR for his MD degree, was found dead under mysterious circumstance.
Delhi cops suspect Sarvanan might have died due to overdose of an injection as two syringe needle marks were spotted on his body.
He had joined the institute about a week back in the July batch of admissions.
NEIGHBOURS FOUND HIM DEAD
After he did not report to duty this morning, his colleagues and senior residents of the Department of Medicine started calling him, but not getting any response from his phone they tried calling his neighbours who then found him in his flat No 83 non-responsive.
The residents of the area immediately informed the Police and his AIIMS colleagues. Around 3 pm today the body of the deceased was brought by police at AIIMS Emergency Department where the MLC was made and the body was thereafter shifted to the mortuary.
Ishwar Singh, DCP (South), said the body has been sent for post-mortem. No any suicide note was found. The post-mortem, conduct by a team of doctors, will be videographed.
FAMILY TO REACH ON MONDAY
His parents in Tamil Nadu have been informed who are learnt to be reaching on Monday morning.
The AIIMS faculty and administration said they are deeply concerned about the incident and will cooperate with the police in its investigations whenever necessary and asked for.
Hospitals