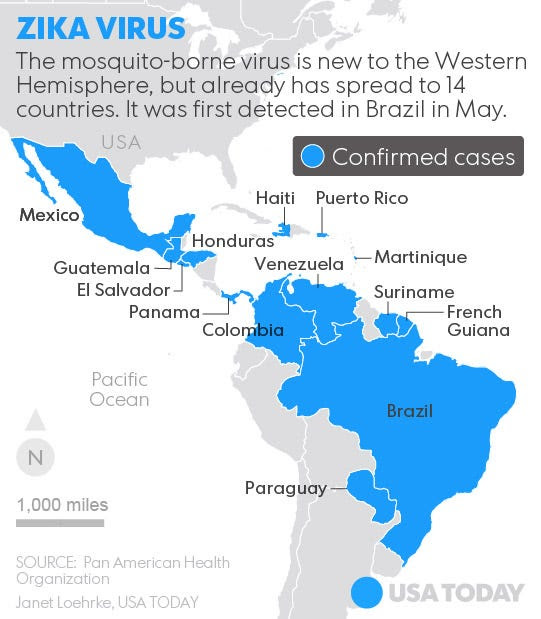 The Ministry of Health and Family Welfare issued guidelines on the Zika virus disease, here. The text of the guidelines is as follows.
Background
Zika virus disease is an emerging viral disease transmitted through the bite of an infected Aedes mosquito. This is the same mosquito that is known to transmit infections like dengue and chikungunya.  Zika virus was first identified in Uganda in 1947.
World Health Organization has reported 22 countries and territories in Americas1from where local transmission of Zika virus has been reported. Microcephaly in the newborn and other neurological syndromes (Guillain Barre Syndrome) have been found temporally associated with Zika virus infection. However, there are a number of genetic and other causes for microcephaly and neurological syndromes like Guillain Barre Syndrome.
Zika virus disease has the potential for further international spread given the wide geographical distribution of the mosquito vector, a lack of immunity among population in newly affected areas and the high volume of international travel. As of now, the disease has not been reported in India. However, the mosquito that transmits Zika virus, namely Aedes aegypti , that also transmits dengue virus,  is widely prevalent in India.
A majority of those infected with Zika virus disease either remain asymptomatic (up to 80%) or show mild symptoms of fever, rash, conjunctivitis, body ache, joint pains. Zika virus infection should be suspected in patients reporting with acute onset of fever, maculo-papular rash and arthralgia, among those individuals who travelled to areas with ongoing transmission during the two weeks preceding the onset of illness.
Based on the available information of previous outbreaks, severe forms of disease requiring hospitalization is uncommon and fatalities are rare. There is no vaccine or drug available to prevent/ treat Zika virus disease at present.
World Health Organization has declared Zika virus disease to be a Public Health Emergency of International Concern (PHEIC) on 1st February, 2016.
[1] Zika virus disease has been reported so far in the following countries; Brazil, Barbados, Bolivia, Columbia, Dominican Republic, Equador, El Salvador, French Guyana. Guadeloupe, Guatemala, Guyana, Haiti, Honduras, Martinique, Mexico, Panama, Paraguay, Puerto Rico, St Martin, Suriname, Virgin Island  and Venezuela. It may be noted   that this list is likely to change with time. Hence, updated information should be checked periodically.
In the light of the current disease trend, and its possible association with adverse pregnancy outcomes, the Directorate General of Health Services, Ministry of Health and Family Welfare advises on the following:
1.1.      Community based Surveillance
1.2       International Airports/ Ports
1.3    Rapid Response Teams
1.4       Laboratory Diagnosis
2  Based on available evidence, World Health Organization  is not recommending any  travel or trade restrictions.
Health News