It`s quite ironical that the National eligibility and entrance test, put in place by the UPA government has had to threathen all its applicants with something thats abbreviated to an 'NDA'!
And they`ve been doing it with the sheer ferocity of a stalker.
To deal with a test of the magnitude of the NEET and brandishing it with an NDA is to keep a sheep inside a lion`s cage with a rat assigned with duties of protecting it.

(Of course no one breaches it on their fb messengers, texts or whatsapp; total sanctity there!!)
The most tangible thing about this whole process of putting up a brand new refurbished version of what probably was the only test that required a medical student who wanted to pursue his post graduate studies to finally use a small percentage of the rot that he`d filled in over five long years was probably its shock value...
I know I used way too many adjectives there, but when you actually put this entire NEET episode in perspective, its just that kind of a story.

Coming to the surprise factor;
Just imagine how many people it must`ve shocked, just about everybody else except the idiotic mind who got this ideal which probably belonged to an aristocratic bored minister who could`nt quite manage a decent siesta one sad afternoon. His obvious wrath eventually resulting in countless traumatic nights for students at the bottom of the food chain!
From the MCI president himself, to countless deans and lakhs of students; it left all of us a little flustered, if not absolutely flabbergasted!

Lets just look at it from the inception of this whole notion of NEET itself;
The culprit in chief; the King of the Jungle was a defunct health minister who had other priorities in life.
Just imagine your health minister being the troubleshooter in chief of the biggest regional problem of your country; in this case, the 'telangana' issue; now we can't really blame him for treating the entire health fraternity as second class citizens; after all a certain G had assigned him this task.
On the other hand we have our 'zero loss theory' HRD minister opening up new IITs faster than McDonalds expanding its franchise in the country. Now with that kind of pressure and peer pressure he had to bully somebody; and who better than fresh medical graduates already biting their nails over the possibility of a post graduate seat.
His accomplice in chief and the chief of the MCI, appeared on the Aamir Khan`s show and showed the world what exactly was wrong with medicial profession, predominantly, by just being there!!
Now he had ousted a supposedly extravagant and corrupt chief.
He collected his own team of self righteous Doctors who had probably long left the world of medical education, far from writing an entrance exam and scribbled down an atrocious piece of paper they called 'Vision 2015'.
This ridiculous piece is the actual bounty that you get after you're done with the NEET!
In comes a journalist from a bankrupt media house on the verge of irrelevancy; having had to sell its IPL team in the calendar year to break the news of such a setup being coordinated by the godfathers of medical education in the country.
The only guys who were laughing their heads off through the process were the 'prometric' guys;
I guess the government would add as one of their new 'employment' schemes!

And as the news was first put by the paper around 2 months before the actual announcement and taking into account the credibility of the paper and the record of the government on such issues: it was taken as a pretty 'neat' joke! 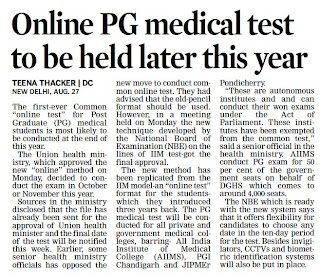 The hurricane first hit the coast on a calm morning in late september; major newspapers carried a tiny piece in one of the back pages that was going to change the lives and aspirations of medical students in the country forever. Such was the nastiness of the deal that it was taken as a joke that would be laughed at by most private colleges and eventually knocked off; sadly, we didnt realize till it was pretty late that the joke was on us!!

After the seriousness set in and the students started with their absolute harakiri; the coaching classes had the ball of their lives.
Everyone had a certain NEET pattern; every institute and every book had one, which of course proved to be the precise opposite of the actual pattern that was to eventually come.
(Calling those questions as having a pattern would be a bit of a joke in the first place)

But most people stuck to their guns and studied. We had to get registered for the NEET though and that process was in most opinions a bigger test of endurance, physical and mental than the exams themselves. I bet no one imagined that a thousand doctors would ever queue up outside the major branches of a bank through the country;
I bet certain enterprising corporate houses are already coming up with free medical checkup schemes from next year!!

Coming to the actual exams; I officially cannot discuss a word about it after being threatened by the NDA. And very honestly, there`s nothing to really talk about them if you know what I mean.
Just that in a gist, at the end of it all, you need to be a little more than doctors to deal with the questions!
The more important things are having the memory of an elephant, a qualified astrologer to get a date for you and luck; truckloads of it.

Of course, the new pattern means in a competitive exam, you get ranked according to scaled scores and get listed according to that, which as mundane as it seen is a groundbreaking first!
Not the CAT, nor do the USMLE guys have the audacity to be so reliant on their exams to judge candidates on that alone;
Congratulations NBE!
I guess I should congratulate the NBE twitterman but he`s a little too rude to reply and does'nt have the designation of accepting satire either!

Now talking about the actual affect of the NEET on the system as a whole; you dont really need to know rocket science to understand the priorities of a government that pre-pones the most important test of the lives of its doctors by two months just so it helps the 'prometric' guys to help it fall in line with the management entrances.
For the current batch, the damage is`nt critical. The only factor that helps it is that paradoxically none of us knew that we had such an exam lined up for us when we came into the year.
So it was just more of the anger and resentment that had its roots in the different format and pre-ponement of the exam.

The damage to the incoming batches would be a lot more severe. Considering the actual format of the exam, the entire process of medical college for the period of four and a half years goes for a toss.
I guess a student who joins med school would be assigning himself to four years of vacation with a few exams that he needs to pass in the middle; its akin to making sure a medical student knows which textbooks he needs to get for a subject!!

The stark effect will be on the clinical side; that`s where this system will produce douchebag doctors by the bucketful. The entire concept of attending clinics, scoring in vivas would be made obsolete by the new system. Seriously, what motivation would you give a 3rd year student to leave his holy books and tend to a clinical case. Why would he want to listen to a murmur, illicit a reflex or watch over a surgical procedure now?

You might actually have people actually tending to and interacting with patients after they`re done with their eligibility exams, in their post graduation!
(Munnabhai might become a reality, you never know)

Of course, however you malign the exam, it was done with the purpose of streamlining the medical process in a country that has different benchmarks that produce doctors and a lot of them are in dark shades. But taking such short cuts for the same is definitely not the way.
Encouraging a three hour period of sheer luck over years of consistency is clearly not the way forward.

The solution is rather simple to put in an ideal world but difficult and not impossible to put up;
Steps of exams conducted for the practicals as done by the MLE is a way out.
A more streamlined approach would be to take a series of test each year at the national level and put up an aggregate at the national level; the best option in my personal opinion.

But all said and done, preparing and giving the NEET was an experience that none of us will forget, no matter which way the tide eventually turns.
Hope I dont have to regret writing this in a couple of months.

P.S This is a satire, put up in jest.
No names have been taken and any breaches of the NDA have been ceremoniously avoided!
PG News