A 20X20 feet dingy operation theatre, only four doctors for hundreds of patients and severe funds crunch. Apparently, the haematology department at the NRS Medical College and Hospital can be written off like any other government hospital in the country. But a look at the department's achievements over the last few years changes all equations. Since 2009, it has successfully conducted 16 bone marrow transplants (BMT), a feat that's considered a herculean task taking into consideration the tremendous constraints the department works in.

No wonder then, two international luminaries on blood disorder will visit the hospital to be a part of two-day international conference starting Saturday.

NRS had created history in February 2009 by conducting the first BMT in the eastern region. This was also the first such transplant conducted in a government-run hospital in the country. The constraints did not deter the doctors to take up the challenge head-on by carrying out an autologous BMT on Bela Samanta, the 37-year-old homemaker from Burdwan suffering from multiple myeloma, a rare blood disorder.

The only other hospital in Kolkata that has a bone BMT facilities in the Apollo Gleneagles Hospitals opened only in February 2011.

Since February 2009, the unit, under Dr Moloy Ghosh, has conducted 16 such complex BMTs - both autologous and allogeneic. The latest one was conducted on October 4 last year on Sayani Ghosh Dastidar, 11, from Barasat. The girl was suffering from acute leukemia. Sayani's sister was the donor for the transplant. Discharged from the hospital, the girl is appearing for her school examination now.

"We have at least 10 more patients waiting for the BMT. Right now, the unit is under renovation for upgrading facilities. Once through, we will carry on with the transplants," said Dr Rajib De, who headed the operation on Sayani. De rejoined NRS after a year-long fellowship with the Tata Memorial Hospital in Mumbai.

The room with a single window air-conditioner that operates as the BMT unit in the haematology department is a small crumpy space, nothing comparable to units in corporate hospitals. If it was not for the will, expertise and dedication of the doctors, it would have remained as any other department of a government hospital, crying for attention. A four-member team of doctors - Maityree Bhattacharya, Tuphan Kanti Dolai, Shyamali Dutta and Rajib De - are now preparing to take up more BMTs. Ghosh, who headed the department, had retired few days back. In fact, Ghosh does not practice in private to dedicate himself to the department.

In India, BMTs are conducted in very few hospitals like the AIIMS, Army Hospital, New Delhi, PGI Chandigarh, SGPGI Lucknow. These are centrally funded institutes. While many private hospitals have facilities for the transplant, the charges are exorbitant, ranging anything between Rs 10 and Rs 15 lakh. But in NRS, it costs about Rs 2 lakh. The state government had funded a major portion of the expenses in most cases as the patients were from poor economic background.

At present, the hospital is excited to welcome two international luminaries on blood disorders - Dr Neal S Young from Washington and Dr Antonio Palumbo from Italy. While the former, from the National Heart Lung and Blood Institute, is an authority on aplastic anemia, Palumbo - an expert on multiple myeloma - is on the Board of Directors of the International Myeloma Society.

"The doctors at the haematology department have done an excellent work despite all the constraints. The government is trying to extend all help to upgrade the BMT unit. It is an honour for us to get international experts during the two-day conference in our hospital," said NRS medical superintendent and vice-principal Saswati Majumdar. 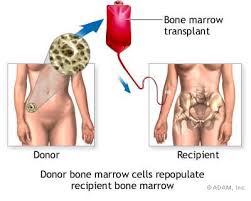